Concept art for a game I'll make someday.  This one in particular I've been working on for years, mostly on paper, although the soundtrack is farther along than just about anything else.  It's called The Cornelius Prophecy, and it's an RPG based on a character who can transverse multiple overlapping dimensions at will.

It's kind of hard to explain, but it has a lot of platforming elements based on this ability.  In an oversimplified example, you might want to get to the top of a tall tower.  But since there are no platforms along the way, it looks impossible.  However, in the next dimension over, there's a set of stairs that lead up to where the tower would be, although the building has long since collapsed there.  So, shift over to dimension 2, climb the stairs, jump, shift back midair, and land on the tower's roof.

Now imagine that dynamic in more complicated scenarios, especially fighting against enemies with the same ability.  I think it's going to be really cool.  ..If I ever get the chance to make it.  Btw, this one's copyrighted and everything, but that's because it's part of a portfolio I'm sending out to some game companies.  TCP is my baby, and I'm not okay with anybody else making it or using the idea.

This is really dumb, but the idea has been stuck in my head since I got up this morning, so I had to make it.

In the past 2 days, I've gone through several years' worth of Penny Arcade, and I think it has permanently influenced my style.  That is a fantastic comic.  Above are the doodles I've been drawing between readings.

Actually, I've been working on this as a Flash game on and off for almost a year now, and believe it or not, it's pretty sweet.

Basically the battle system works like this: you have a grid map similar to FFTactics and a slew of characters that can move around it in turns.  You take out enemy characters by using melee and ranged skills which knock opponents across tiles away from the attack direction and give them damage, as in Smash Bros.  At the edges of the map, there are drop zones--areas which have a grid but no ground to stand on, and this is where the game starts to get interesting.  In addition to ground movement, characters in SSBT can jump to become "airborne."  Someone like Kirby can be airborne for up to 5 turns, and can use a different set of abilities than on the ground.  Additionally, some attacks only target air or ground, some ground attacks end in the air, vice versa, etc.

So!  When a character gets knocked off the map (but not entirely off the grid, which is an instant kill), they can use their jump turns to recover and move back to the map (they also have different movement ranges when airborne).  Hovering off the edge with someone like Peach or Kirby is risky, because a character with no ground beneath him can be spiked.

One more cool thing!  When a character gets knocked back by an attack, the number of tiles he is sent across is based on his weight, his attacker's weight, his damage, the power of the attack, etc.  But if he knocks into another character on his own team while flying, he will knock them back too.  It would have to be a pretty powerful attack, but this could conceivably kill both characters.

The story, however, is even more badass, and was developed jointly by myself and a friend of mine who happens to be a god of good gaming/anime/weapon/rpg/spell/limit break ideas.  ...But I'll get into story details later. 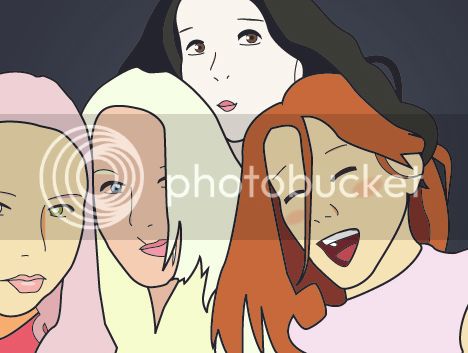 Recently I drew a character concept for a friend.  When I sent it to him, he said it was too anime-ish, so after trying and failing a couple times to get the look I thought he wanted, I got my camera and went to take a picture of myself in the bathroom mirror to use as a reference.  But as I stood there, about to create a mirrorshot, I started to feel the eyes of the world on me--specifically the eyes of the world's tweens, onto whose ground I had stepped the moment I entered that bathroom with digital camera in hand.

As the flash washed out my face the first time, I felt them all laughing at me.  Thousands of girls, staring and watching and laughing on the other side of the mirror.

Sometimes--sometimes I find my self thinking about a thing, and I realize I have a greater knowledge base about that particular niche than almost anyone else in the world.  Since I grew up playing video games, this immediately makes me want to write a guide/walkthrough about the subject.  I think that would be a fantastic idea for a website: gamefaqs for life.

I would write faqs about:
1. How to recognize a traced picture
2. How to use deception and patience to win at Smash Bros.
3. How to hide the darkest secrets of your life in the unnoticeable details of your artwork
4. How to throw people off the trail of your darkest secrets by dropping false hints about them being hidden in your artwork
5. How to drive like a pizza boy and never get pulled over
6. How to go unnoticed in a crowd
7. How to hate music properly

Today, I thought it would be fun to try and learn a new toolset in Illustrator--Gradient Meshes.  These allow you to create gradient fills in which colors adhere to vector paths and blend into one another in the spaces between.  I looked up some info online and started in on my first project: *gasp* a girl.

Here is the final product.  I just didn't have it in me to make her some shoes.  It's pretty cool I guess, but for the amount of time I put into it, I'm kind of angry that this is the result.  On the other hand, I can now make textures that wouldn't look out of place in an N64 game.

Have you heard of Conveyor Belt of Love?

It is a new show in which men are conveyed before a panel of women who decide which look the best, and then they go out on dates.  This is real!

I haven't even seen it yet, but that's beside the point, which is this: WHAT A CULTURE WE HAVE DEVELOPED!